It’s claimed Spurs made a move for the Ajax midfielder, but he made it clear he’d prefer a transfer to Real Madrid. As far as the Dutch newspaper have it, the feeling is mutual between Van de Beek and Los Blancos, with the Spanish club prepared to pay a €55m transfer fee.

De Telegraaf report Real Madrid knocked on Ajax’s door in June, when Marc Overmars told them he’d require €50-60m to sell the player. As things dragged on, and Madrid had other targets, the player decided to stay in Amsterdam.

A ‘multi-year’ contract is said to be awaiting Van de Beek at Madrid, which goes without saying really… they’re hardly going to sign him up for 12 months.

In a separate column from Valentijn Driessen it’s stated: ‘From 1 July 2020, Donny van de Beek is a member of the Royal family. He will then exchange Ajax for Real Madrid. None of the three parties want to confirm the transfer at this stage, but the announcement of the transfer and the agreement is a matter of time.’

Are Tottenham just being used as window dressing here? It’s not clear and it’s not even stated when Spurs made the approach or whether it was before or after Jose Mourinho took over at the club. 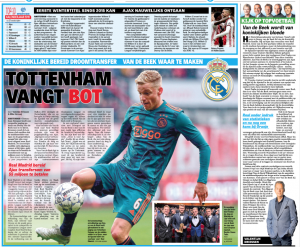 After the Manchester United option, given that Christian Eriksen would be free next summer it’s not too hard to assume he’d be the second choice.