Home Europe Tottenham to return with another offer, but want to wait around a...
SHARE

Another day and more claims about Tottenham and Adrien Silva in the Portuguese media. On Saturday it was reported that Tottenham are set to return with a second offer for the player, having already had a bid of ‘not more’ than €20m turned down by Sporting.

Sunday’s edition of Record once again says Tottenham will make a second approach, and states the Premier League club are a ‘serious suitor’ who are absolutely set to return to try and sign Adrien again.

All transfer delays related to Portugal internationals are currently being explained away as related to the Confederations Cup. Record claim Tottenham will return with their new shiny offer after the tournament.

Of course, the Confederations Cup has absolutely zero impact on Tottenham making an offer. If the club’s interest is genuine then they’d surely want the deal agreed by the end of the tournament, or when Portugal get knocked out, so Adrien could have his 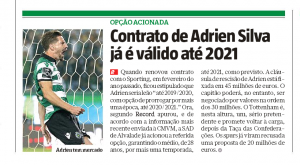 medical and then go on holiday.

Waiting doesn’t make a great deal of sense, but then the whole rumour has been in that category since the start.

Record report Adrien Silva’s contract which had been due to end in June 2020, now ends in June 2021, after the club used a clause to extend.