Tottenham’s hunt for Joachim Andersen, while not over, could be taking a serious dent in the near future, as Corriere dello Sport report Inter are relatively confident of being ahead of the pack for the young Dane.

Spurs, who are bracing themselves for the potential departure of Toby Alderweirled (and maybe even Jan Vertonghen), have been looking at the Sampdoria defender, going as far as to ‘request information’ on his situation.

This would be ahead of the 2019-20 season, and not in January, as the Serie A outfit aren’t willing to let their new starlet go midway through the season.

Yet Tottenham’s lack of movement beyond this request has given Inter the advantage, as their director of football, Piero Ausilio, has gone a step further, meeting with his Sampdoria counterpart, as well as a couple of agents, about Andersen. 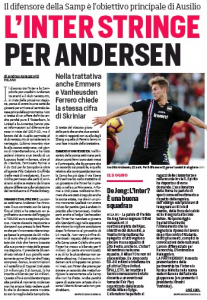 The talks are said to have gone well, but the player’s valuation still needs to be determined, with €25m deemed insufficient, as chairman Massimo Ferrero wants a similar fee to the one they got for Milan Skriniar last summer (€30m+).

There’s no rush here, meaning Tottenham still have time to turn things around, but the last thing Daniel Levy and Mauricio Pochettino will want is to remain too passive only to see a more proactive Inter snap up the 22-year-old.