Tottenham are interested in Borussia Monchengladbach forward Jonas Hofmann and may be given the opportunity to sign him this summer.

That’s according to SportBILD, who say the right-winger is aware of interest and may seek a move away as a result.

Hofmann has been in fine form for the Bundesliga side this season, with eight goals and three assists in 22 games in all competitions, making him the club’s top goalscorer.

The German club would like him to sign a new deal, as his current contract expires in the summer of 2023, and he continues to be one of the ‘figureheads’ in the current team.

This has been made clear to Hofmann by new sporting director Roland Virkus and while he is ‘not reluctant to stay’, he is aware that ‘lucrative offers from abroad’ could soon be winging their way to his agent.

Indeed, he has been the subject of ‘renewed interest’ from Tottenham and Atletico Madrid in recent weeks. 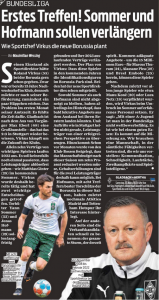 He, then, is keen to see what his options are before making a decision, particularly as Borussia have made it clear their intention is to reduce the wage bill this year, so there won’t be any wage increases should he sign a new deal.

That opens the door for the likes of Tottenham to get their man, and potentially at a reduced price given he’ll be in the final year of his deal.

The nature of their ‘interest’ isn’t made clear here so we’ll have to wait for details on that, but it seems Hofmann is at least a name on their list for the summer.