A big fan of Marcel Sabitzer, José Mourinho wanted the Austrian when he was manager at Tottenham.

Since sacked from Spurs, the Portuguese manager has taken the reins at AS Roma, where he would still like to work with the RB Leipzig midfielder.

Gazzetta dello Sport cover the interest from the Serie A side on Thursday, explaining Mourinho has been after Sabitzer ‘for a couple of years now’, and with the German club bringing in the likes of Mohamed Simakan, Brian Brobbey and Josko Gvardiol, it’s been announced there is a need to sell.

The 27-year-old could be a sacrifice, as he has ‘made it clear he doesn’t intend to renew’, and despite Mourinho no longer being at Tottenham, it’s stated the Premier League club ‘remain at the window’ and are a ‘dangerous competitor’ for Roma. 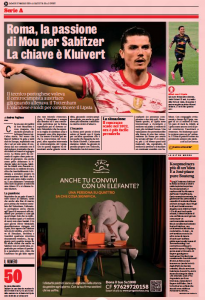 That’s ‘especially if the club end up selling Tanguy Ndombele’, which would allow them to bring in some cash for Sabitzer’s arrival.

One to keep an eye on, but it’s interesting to hear that Spurs haven’t entirely given up on the player despite no manager currently being in place.

Perhaps they liked one thing Mourinho did after all.