If you believe both Tuttosport on Wednesday and Corriere dello Sport on Thursday, then Juventus have made a snap decision of backing away from Nicolo Zaniolo.

The former of the two stated Tottenham’s interest in the Roma youngster had forced the Serie A champions to jump into action and ensure they were ahead of the curve for his services.

However, Corriere dello Sport see it very differently, explaining Juventus are ‘braking’ in their attempt to sign the young revelation, even if the midfielder’s agent recently met with Fabio Paratici.

The Italian newspaper explain Tottenham remain the ‘hottest lead’ for Zaniolo, as Spurs, clearly keen to make up for their past two barren transfer windows, are ‘ready to present a €50m offer’ for the 19-year-old.

The amount corroborates previous reported amounts, and the fact Spurs keep coming up as an interested party when other big names (like Manchester City) have dropped out is interesting. 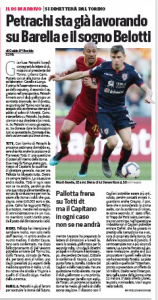 When a story goes on this long, it usually means there’s no smoke without fire unless the selling club are actively shopping the player (a bit like Benfica did with Nico Gaitan all those years ago).

Gazzetta dello Sport also have a tidbit about Zaniolo and Tottenham on their website, explaining his renewal at Roma is still some way off being done (they’re offering €1.3m/year, he wants €2m).

Spurs and Juventus are reportedly ‘at the window’, waiting, much like the player, on clarification regarding his future in Italy’s capital.

Ideally, Zaniolo would want to continue at Roma for another year, but if he doesn’t get the wages he believes he’s due after a great breakthrough season in the first-team, he could simply end up looking elsewhere.