Tottenham rebuffed an attempt from AC Milan to sign Serge Aurier, according to Tuttosport.

Milan are on the hunt for a new right-back and have drawn up a list of potential signings for the January transfer window.

Tuttosport say that Aurier was on that list and the Serie A club have already ‘tested the ground’ about a possible transfer.

They say Milan saw Aurier as a perfect signing as not only does he have international experience but he’s also at the right age to deal with a move to a new league without any problems adapting.

Unfortunately for them, Tottenham rejected their advances because they are not in a position to let him go.

After selling Kieran Trippier to Atlético Madrid in the summer, they were left with just Aurier and Kyle Walker-Peters to fill the right-back spot. 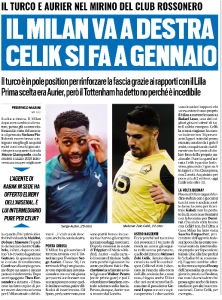 Thus, the interest from Milan was quickly rebuffed by Tottenham, with Stefano Pioli’s side now left looking elsewhere.

For reasons known only by Tuttosport, they used a picture of Danny Rose instead.