Despite Arsenal sending scout after scout to see Cengiz Under play for Roma, it’s Tottenham who appear ready to make the first move as they look to bolster their attack further.

Losing 4-2 to their North London rivals at the weekend, it seems the lost might have kicked Daniel Levy into action ahead of the January transfer window after spending absolutely nothing over the summer.

Corriere dello Sport are the ones reporting this, claiming Tottenham are readying a rather impressive €52m offer for the youngster.

But that is literally all they say. There’s no added detail. It’s just “according to indiscretions, Spurs are ready to put €52m on the table to convince Monchi and James Pallotta”. 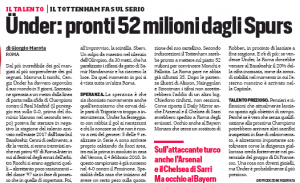 Then they swiftly move on to mentioning a Daily Mirror report about Arsenal and Chelsea scouting him.

Normally, when something this big happens, there’s a lot of detail in the report, with financial breakdowns and talk of agents meeting.

It’s a bit out of character, even for Corriere dello Sport, so we aren’t going to get all excited just yet.

If true, however, it’s an amount that probably will be accepted by Roma, who are very aware this is likely the last season they can manage to keep Under at the club for, with 20% of a future sale going to his former club, Basaksehir.