Gleison Bremer’s emergence at Torino has seen several clubs in Italy and across Europe take note. One among them is Tottenham Hotspur, who are regularly named as his suitor in the Italian media.

Two days ago, TuttoMercatoWeb reported the north London club have a ‘presence’ in the chase, along with Inter Milan, Juventus, AC Milan, Bayern Munich and Liverpool.

With many suitors in the mix for the Brazilian, it was also explained the Serie A side are ‘awaiting the auction’ in the summer.

Thursday’s edition of Tuttosport claims many clubs have ‘lined up’ for the ‘complete player’ after this season and an offer of around €25m would be sufficient for him to leave the Serie A side.

Torino must decide whether to ‘monetise as much as possible’ or accept a player as part of the deal from the centre-back’s sale. Urbano Cairo, the Italian club’s chairman, prefers to sell the star to England for ‘cash’. 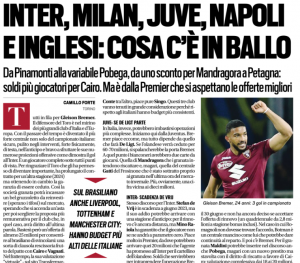 Luckily, for Cairo, there are a few clubs interested in Bremer and this includes Tottenham, Liverpool and Manchester City. These clubs, including Spurs, are ‘ready to open the talks’ for the South American’s transfer.

Tuttosport state ‘these three clubs must be held in high regard because compared to the Italians they have larger budgets‘.