Home Championship Tottenham and QPR have asked about buying same player, one to watch
SHARE 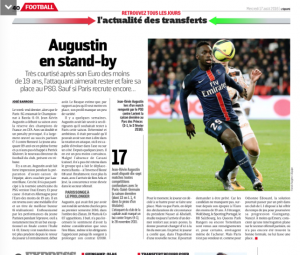 The 19-year-old recently won the Euro U19 competition with France, and ended up as the top goalscorer in the competition.

Augustin was earlier determined to stay at Paris-Saint Germain this season, as he was hoping to provide back up to Edinson Cavani, but Unai Emery left him out of the trip to Bastia despite injury to Cavani.

The arrivals of Jese Rodriguez and Hatem Ben Arfa have only made life more difficult for Augustin, despite the departure of Zlatan Ibrahimovic.

That has obviously forced Augustin to consider his options, an the likes of Wolfsburg, Sporting Lisbon, and RB Salzburg are also interested.

L’Equipe say that the teams mentioned have enquired, and some are even thinking about buying the player.

Augustin managed over 1200 minutes under Laurent Blanc last season, and has another two years left on his contract.