Tottenham could be one of the options of Paris Saint Germain striker Mauro Icardi this summer, should Harry Kane leave the club.

That’s according to L’Equipe, who speculate Spurs could turn to the Argentine if they lose their star man.

Kane has been heavily linked with a move away from Tottenham this summer, with reports that he has grown frustrated by the lack of progress at the club.

He has regularly been urged to leave in search of the trophies that have so far been missing from his career, and some believe he will listen to that this summer.

Should he leave, Tottenham would be left with a huge hole to fill, and L’Equipe posit that Icardi could be one they look at.

The newspaper explains that Icardi has made it clear to PSG that he wants to leave this summer after a difficult 16 months at the club.

The French giants are not going to stand in his way as they need to free up space on their wage bill, and the Argentine earns €10m a year.

He has a value of €35-40m, according to ‘market players’ that L’Equipe have interviewed and his representatives are ‘sounding out the market’.

At the moment, though, it is ‘difficult to imagine’ an offer that will be ‘sufficient’ enough to help PSG avoid his transfer to the club being a failure. 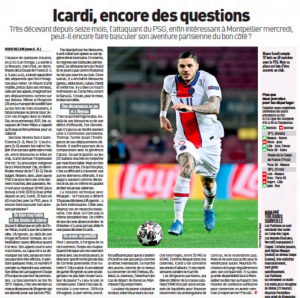 There is a market for centre forwards, though, with Chelsea, Atletico, Juventus and Manchester City among those looking for one. Tottenham will also be in there, but only if Kane were to leave.

One fly in the ointment could be former Tottenham boss Mauricio Pochettino, who has a ‘relationship of trust’ with Icardi and has been using him lately.

Whether that relationship is strong enough to build a common future isn’t known, but it’s hinted that he could stand in the way of him moving to his former club.

It all rests on Kane either way; if he leaves, Spurs will need a replacement, and Icardi is one of those to keep an eye on.