Perhaps it’s time to announce that the Bruno Fernandes saga is officially back.

After a couple of months of silence, we saw a few more rumours about the Sporting captain last week, and now Tottenham Hotspur are being named as the main contenders for his signing once again.

Newspaper A Bola published a story about Fernandes over the weekend, calling him the ‘most influential player in the league’, since he has five goals and five assists so far.

And they claim that Sporting are open for a negotiation in January, as long as the interested clubs offer the right price. 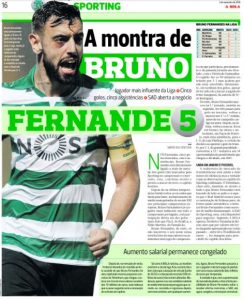 A Bola claims that Tottenham continue to follow the midfielder, being ‘attentive to everything he does’ for Sporting.

Spurs are said to be waiting for Real Madrid to move for Christian Eriksen, and then they will ‘almost automatically’ replace the Dane star with Bruno Fernandes.

It’s said that Sporting want between €60m and €70m for their captain.