Home Premier League Arsenal Tottenham about to prepare their offer, but Arsenal swoop in with €40m...
SHARE

On Thursday it was claimed in France that Arsenal have offered ‘far more’ than €30m to sign Thomas Lemar from AS Monaco.

Then, like clockwork, claims came from the English media that an offer of £31m had been rejected. Of course, that doesn’t sound like ‘far more’ than €30m, especially at current exchange rates, but it was taken by most fans as fitting.

The two claims may not sit so well together after all.

In their Thursday edition, L’Equipe report that Arsenal are the most interested of several English clubs. Following is Tottenham who are ‘about to prepare an offer’, which makes it sound like Mauricio Pochettino and Daniel Levy are getting their craft tools out.

Joining Arsenal and Tottenham are Chelsea, Manchester City, and Manchester United. The former two want to speak to the player’s agent, whilst Jose Mourinho’s club have asked for information about a possible signing. It’s worth pointing out the Manchester clubs and Chelsea aren’t presented as being as serious as Arsenal and Tottenham, or are a little slow on the take-up. 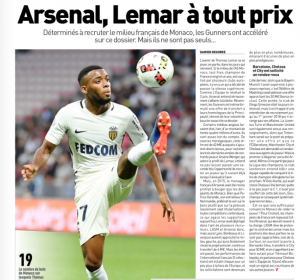 According to L’Equipe, English claims are ‘pretty far off’, and Monaco sources say Arsenal’s offer is actually €40m plus bonuses. That makes a lot more sense and fits in better with the ‘far more’ than €30m claim.

‘For now’, Monaco have rejected Arsenal’s offer, and they’d like Lemar to renew his contract, which currently runs until 2020. The 21 year old’s entourage aren’t showing much willingness in that direction, which gives hope to Arsenal, Tottenham, and the others.

Liverpool made attempt for signing ‘a few days ago’ – Player...