A possible swap between Tottenham Hotspur and Inter Milan seems to have become a hot topic in the Italian press lately.

There are two outlets who talk about this possibility today, saying Tanguy Ndombelé could head to the Nerazzurri, while Milan Skriniar would move the other way.

Newspaper Tuttosport was the first one in the morning. They say the defender should leave Inter Milan this summer, and among the many interested sides in the Premier League, Tottenham are ‘in pole position’ for the signing.

A reason for that is the Italian side are keen on signing Ndombélé, so a swap ‘would benefit both clubs from an economic point of view’. 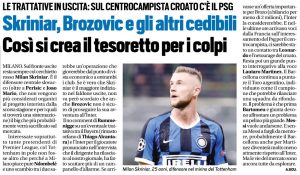 Something similar can be read on Tutto Mercato Web. They say this is a negotiation which ‘Tottenham are keeping alive’, so we must ‘keep an eye’ on it.

Both outlets claim that Antonio Conte won’t make any effort to keep Skriniar at the club, with the Italian media suggesting the pair don’t get along.