Home Europe Tottenham and Pochettino expect to have clarity on player’s situation by end...
SHARE

Christian Eriksen has 18 months left on his contract at Tottenham Hotspur.

Mauricio Pochettino, the north London club’s manager, admitted that his side wants to keep the playmaker beyond the next season, but claims his situation is “dynamic”.

The former Ajax man has been linked with big clubs across Europe, particularly with Barcelona and Real Madrid in the last few summer transfer windows.

In today’s edition of Danish newspaper Jyllands-Posten, it is claimed the 26-year-old will face his career’s ‘biggest and most important’ contract. 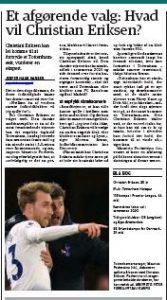 The player is still in a dilemma of whether to extend his stay with the Premier League outfit or make a switch to the top clubs in the continent – like Barca or Real – either at the end of this campaign or after his contract expires.

Journalist Jesper Haue Hansen gives an advice (which is quite obvious) that he would end up earning more if he runs out his current deal and joins another club on a free transfer.

Either way, Tottenham and Pochettino are expected to have more clarity on Eriksen’s contractual situation by end of this term.