Home Europe Tottenham player ‘would be willing’ to join another club if salary demands...
SHARE

With less than a year left on Christian Eriksen’s contract, reports coming out of Spain suggested last week that Tottenham Hotspur chairman Daniel Levy wants to cash in from his sale in January rather than allowing him to leave for nothing next summer.

Real Madrid are one of the clubs believed to be interested in the Denmark international in the mid-season transfer window.

AS claims Los Blancos’ decision to sign the 27-year-old in January will depend on the team’s progress this season and also if the current crop of midfielders have picked up injuries.

The newspaper states the advantage for Real Madrid in signing the former Ajax man is that he will be available cheaply.

He currently earns €4m net per season at the north London club and Spurs have offered him a four-year deal worth €6m-a-year. However, he is resisting it so far. 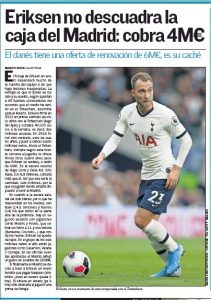 AS explains Eriksen ‘would be willing’ to join Zinedine Zidane’s side for €6m.

His demands would not be too high for Real Madrid, considering there are several players who are already paid more than the quoted figure.

It remains to be seen if the La Liga side will make an approach for the Tottenham player in January or not.