Didier Deschamps has spoken about Hugo Lloris’ injury situation, after the Tottenham goalkeeper missed his club’s defeat to Watford on Sunday.

It was already known Lloris wouldn’t be taking part in the match, with Mauricio Pochettino earlier confirming the issue in his pre-match press conference.

As soon as news of the injury became public, the French media insisted their national team captain would still be joining up with the squad, regardless of whether he was fit to play or not.

That’s not because there’s a lack of trust between Deschamps and Spurs, there just seems to be an eagerness in France to get all the World Cup winning players back together, even if Lloris then has to leave the squad.

L’Equipe quote the manager as saying: “He has a small muscle problem. He’s supposed to be here and we’ll be up to date tomorrow with the medical staff.”

Later on Monday, France’s medical team will assess the situation, but there’s the suggestion Lloris will be released and a replacement called up. 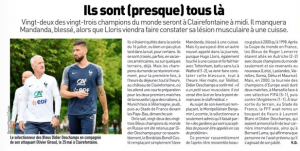 That would allow the Tottenham player to have a small break, which would prove beneficial given he only really had two weeks of holiday in the summer before starting fitness training at Nice.