Spurs let the 26-year-old join Villarreal on loan in January and they have a desire to buy him this summer.

AS on Thursday explain Los Rojiblancos want the midfielder and will have to rival Unai Emery’s side for his signature.

Atlético have long had their sights on the player and made attempts to sign him before he joined Tottenham from Real Betis in 2020. The Madrid club are again interested in Lo Celso and their sporting leaders are of the belief he ‘fits perfectly’ into Diego Simeone’s plans.

The Argentine international ‘seduces’ the 52-year-old manager, who is also convinced of his profile and qualities.

The ex-PSG man has no future at Spurs under Antonio Conte, and is willing to look for a new club. Tottenham, down their end, are open to selling him this summer.

Simeone’s side are interested in the South American, but a potential move is connected to the futures of Thomas Lemar and Carlos Soler. The Frenchman has a year left on his deal and his future is still unknown as he not responded to their renewal offer.

Apart from Lo Celso, Atlético are also interested in the Valencia player. Los Ches are ready 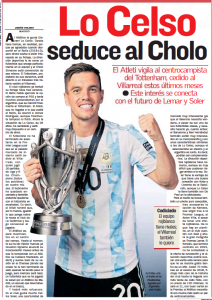 to sell Soler to improve their financial situation and Simeone’s side believe his signing can be a good market opportunity for them.

Soler is right-footed, while Lo Celso is left-footed. The two can compliment each other, but AS add it is very difficult for Atlético to sign both of them.