This week’s edition of France Football has an interview with Hugo Lloris, and as often happens, little snippets are already being released to the French media.

L’Equipe is part of the same media group as the magazine, and they’re using a quote to highlight and publicise the interview today, and it’s perhaps one of the parts of the interview which will have most impact.

The Tottenham player simply stated: “I am involved in a project and I know that I’m less likely to win trophies here than at another club, but that doesn’t stop me, far from it.”

It’s not the first time goalkeeper has spoken about the importance of the project at Spurs, and how it’s different to many other big clubs. Far from annoying him, Lloris appears to be proud of what has been achieved at Tottenham as a club since he’s been there, even if it doesn’t involve picking up any silverware yet. 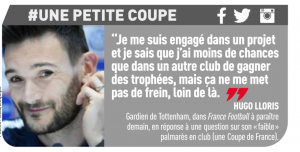 That’s not to say he’s unbothered by the lack of a trophy to lift, just that he’s made it clear on repeat occasions that doing so with Spurs would be far more special than elsewhere.

Winning the World Cup in 2018 no doubt provided some comfort on the trophy front.