Tottenham defender Juan Foyth was pretty much nailed on to start for Argentina tonight against Mexico.

Injuries to other players and a desire to give the youngster a go, had led the Argentine media to become convinced. Patterns in the national team training then backed up their belief further.

For the 20 year old it would be another big step forward in his career. Now becoming more prominent with Tottenham, a debut for his country would be a further boost at such a young age.

But, there’s a problem.

TyC Sports, one of the biggest publications of their kind in Argentina, report Foyth has picked up a facial injury. He collided with Gremio’s Walter Kannemann in training and took a blow to his cheekbone. 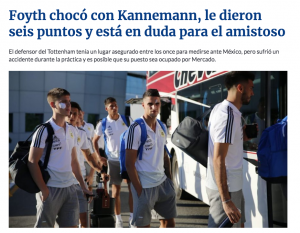 It’s now unsure if he’s able to play, and the report explains that should Foyth have to pull out then he’ll be replaced by Sevilla’s Gabriel Mercado in the team tonight.

Foyth and Erik Lamela are both pictured with dressings on facial wounds.