Shinji Kagawa signed a two year contract with Real Zaragoza at the beginning of August, despite the club being in Spain’s second division.

Having long held a desire to play in Spain, Kagawa found himself without a lot of options and therefore had to drop down to the second tier. For years the 30 year old has been trying to get back to the best form of his first period with Borussia Dortmund, and has struggled to do so.

He returned to the Bundesliga club after struggling at Manchester United, and has told Marca that the period after that return was the most difficult of his career.

The Spanish newspaper sat down for a chat with Kagawa this week, and towards the end of the interview asked him to name the ‘best in history’ from Asia. That’s when the Zaragoza player took the chance to name a Tottenham star.

“Son Heung-min of Tottenham,” Kagawa stated. “He is a very good player. He’s been shining in Europe for years, both in the Bundesliga and in the Premier League especially, and now also in the Champions League.” 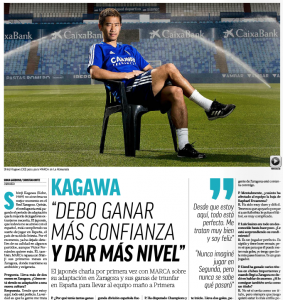 There was a time when Kagawa would be right at the top when it came to talking about the best footballer ever to come from Asia, however, he’s clearly since been overtaken by the Tottenham player.