Making his name in Italy before his big move to Tottenham Hotspur, Erik Lamela is ‘very close to returning’ to the European country.

That’s according to Corriere dello Sport on Thursday, who explain the idea ‘was born in the middle of spring’, with his entourage already having held chats with Milan ‘and in the last few days, they have had very intense contacts with Napoli’.

Right now, the team led by Gennaro Gattuso ‘are the favourite’ to bring him back to Serie A after eight years in the Premier League.

With a contract expiring in 2022, the Argentine is the one ‘who pushes to return’, and while his favourite destination would be his former club Roma, he has ‘not found admirers there ready to invest in relaunching him’.

Their attacking midfield options are plentiful, meaning that when Napoli came forward, Lamela ‘gave the green light to negotiate with Aurelio De Laurentiis’. 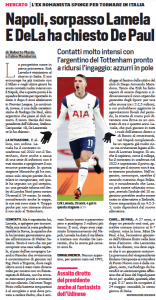 The Tottenham player ‘has made it known he is willing to reduce his rich wages currently guaranteed at Spurs’, settling for an annual figure of around €2m-2.5m/year.

This would be over a ‘three to four year contract’, clearly showing the trust the Italian side have in the man somewhat shunned by José Mourinho this season.

The alternative is Rodrigo De Paul, currently at Udinese, but he would be far more expensive.

It’s a story that’s beginning to take place after coming out of nowhere, and we’ll be keeping a close eye on it going forward.