Jan Vertonghen has had a terrible few days.

Whilst away with Tottenham in Germany for the second leg of his club’s Champions League tie against RB Leipzig, which was lost 3-0, armed men broke into his London house.

This has inevitably left the Vertonghen family shaken, and the Spurs star is the latest in a long line of footballers to have their homes targeted whilst they’re on away trips.

There’s previously been a cluster of cases related to Liverpool, and Real Madrid and Barcelona players have faced a similar issue. That’s led to advanced home security for many, although it’s a balance between keeping your own freedom and locking everything down.

Monday’s edition of HLN looks at the defender’s situation, and makes clear just how shaken it’s left him. Vertonghen’s worry was ‘completely off the chart’ and he was left 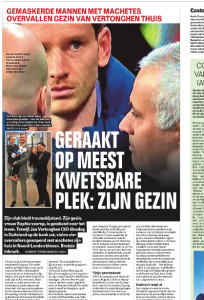 ‘worried sick’ when he heard the news.

There’s a suggestion, and that’s all it is, that the family may now not be quite as happy in London as they have been.

HLN points out they still own a house in Amsterdam, from the player’s time with Ajax, although there’s no overt claim he’d now look more positively on a return to that club.