Real Madrid supremo Florentino Pérez has started plans for the next season after being confirmed as the club’s president until 2025.

Sport on Saturday explain Gareth Bale is one of the players included in Pérez’s ‘blacklist’, as these players have no future at the club.

The 31-year-old is currently on loan at Tottenham Hotspur and the north London club don’t have any option to extend his way. The Welshman earlier admitted he’s planning to return to his parent club in the summer.

Spurs have seven matches left in this campaign, after which the forward will have to return to the Spanish club.

Zinedine Zidane’s side, however, would not want him back. The attacker earns €15m net per season at Real Madrid and his high salary makes it difficult for Los Blancos to place him at another club. 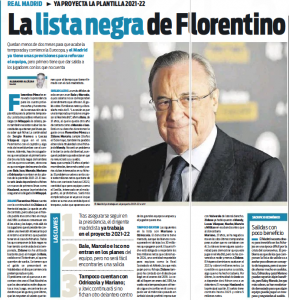 Bale’s current deal at Santiago Bernabéu runs down in 2022 and as per his contract, he has a ‘right to return’ to Real Madrid, whether Pérez and Zidane ‘like it or not’.

Real Madrid fear the Tottenham player will arrive at Valdebebas on the first day of the pre-season training in July, even though they don’t want the player at the club.

The coming months won’t be easy for both the Tottenham man and his parent club, Real Madrid, until a compromise is reached between the two parties or a new solution is found.