Hardly enjoying his best season at Tottenham since his transfer from Burnley, Kieran Trippier’s future in London has been a source of speculation over the past few weeks.

As well as Manchester United, teams abroad like Napoli have been linked with the 28-year-old, with some going as far as stating a €15m bid was rejected by Spurs for their defender.

Unwilling to part ways with a starter for so little, the general consensus was that €35m should do the trick, but that is now €30m, according to Corriere dello Sport.

The Italian newspaper, piggybacking off the weekend reports claiming Trippier’s wife was in Naples to look at schools, explain the Tottenham right-back is ‘attracted’ to the idea of ‘painting his life blue’, alluding to the Serie A side’s shirt colour. 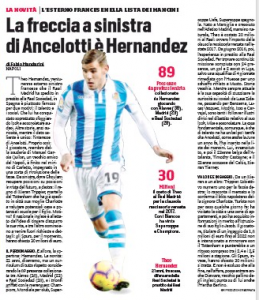 Corriere also write it ‘isn’t to be excluded’ that Napoli could use Amadou Diawara to try and convince Tottenham down the line, but nothing, for now, suggests that is currently the case.

Since joining Spurs from Burnley back in 2015 for just under £4.5m, the defender has made 112 appearances in all competitions under Mauricio Pochettino, scoring two goals and assisting teammates 24 times.

He was also instrumental in England’s good run at the World Cup in Russia, where Gareth Southgate’s men made it to the semi-finals before ultimately losing to Croatia, the competition’s runners-up.