The midfield berths at Spurs were coming under greater competition, both defensively and more forward. Eric Dier began to have an impact and Dele Alli immediately showed that he’d be first team staple for the foreseeable future.

Pochettino added to his options with Victor Wanyama, Moussa Sissoko coming later, and Nabil Bentaleb became an outcast. With no real Tottenham future in sight, Bentaleb went on loan to Schalke followed by questions about his character.

Despite the German media trying to destroy him at the beginning, Bentaleb has been superb. Without a doubt one of Schalke’s best players so far this season and a real Bundesliga revelation. 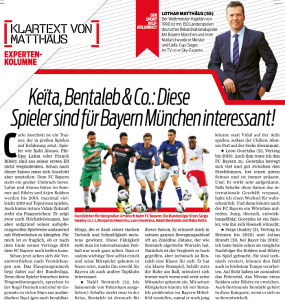 Schalke have recently taken their option to sign the Tottenham outcast permanently, but he could be leaving quickly if Lothar Matthaus gets his way.

The German football legend believes Bentaleb is a good candidate for Bayern Munich in the summer, and he praises the midfielder as much if not more than all of the other potential recruits: ‘He often reminds me of Zidane, who, like Bentaleb, has Algerian roots. Of course, the comparison is too high, but technically Bentaleb is in a class of his own.”

From being seen as a moody Tottenham player, on the fringe of Pochettino’s squad, Bentaleb now finds himself being recommended to Bayern Munich by Lothar Matthaus. Things have certainly changed.

West Ham have made ‘good offer’ – Player ‘studying’ it, ‘biding his time’ in case better club comes along

Club owner ‘continues to consider an entry in a club like...