Juventus and Inter Milan have turned down an opportunity to sign Philippe Coutinho due to the Barcelona owned player’s high wages, according to Sport.

It’s claimed the 27-year-old’s agent has been trying to convince Tottenham Hotspur to sign the playmaker.

The newspaper states Spurs are one of the ‘most interested’ clubs in the Brazilian, who is currently on loan at Bayern Munich.

According to the report, the sporting leaders of the La Liga winners and Tottenham are ‘intensifying contacts’ to try and reach an agreement for the transfer.

The Catalan club’s idea is to sell the player before the end of this month so that they can include the money raised from his transfer in this year’s finances. However, it isn’t an easy task.

Barca are aware no club would be willing to meet their €90m valuation. Therefore, they are ready to lower the price to €50-60m and take a player from Spurs in return, preferably a centre-back or left-back.

José Mourinho’s side are aware that signing Coutinho means taking important economic risks, which is why they are in the process of negotiationing a loan deal with a purchase option. 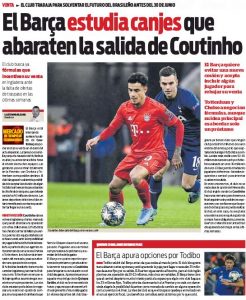 Sport state the Camp Nou side want to avoid another temporary spell and they are determined to sell the South American in the upcoming window.