Portuguese newspaper A Bola on Monday brings a story about Bruno Fernandes’ renewal with Sporting, saying the club captain should soon be signing a new contract with the club.

The midfielder should get a pay raise, although his deal’s expiry date and his release clause would not be affected by this new agreement.

Now even though this news could mean a longer stay for him in Lisbon, the rumours of his departure continue, now with Manchester United getting back in the story, along with Tottenham Hotspur.

The Red Devils had been a little forgotten in this saga since the summer, but now they are presented as the competition that Spurs could have to sign Fernandes. 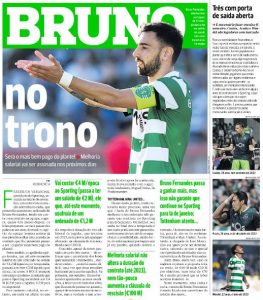 A Bola says it’s ‘practically guaranteed’ that Bruno Fernandes is leaving next summer, but there’s also the chance of a move in the January window.

Manchester United and Tottenham are presented as the ‘strongest interested sides’, but José Mourinho’s arrival at Spurs could be decisive due to his admiration for the player.

It’s claimed that in case ‘the English repeat their bid of €60m + €10m’, Sporting would accept it this time.

Last week, we covered a report saying Tottenham thought of making this bid in the last days of the transfer window, but it was actually never made. In any case, it seems €70m continues to be enough to take Bruno Fernandes from Alvalade.