Tottenham had a scout watch FC Porto on Friday evening, reports A Bola.

Porto are the current Portuguese champions and also the club Spurs have watched most in the country over the past year.

Tottenham don’t send an official to every Porto match but the pattern has certainly been noticeable that the Premier League club have got an eye on the Dragons.

Hector Herrera is the Porto player who has been most recently linked to Tottenham, with claims they could look to land him in January or go for a free transfer when the Mexican’s contract ends next summer.

Captain of the side, Herrera had a reason game as Porto beat Tondela 1-0.

A left back who can also play further forward, Alex Telles has long looked a prime candidate when Spurs have sent someone to watch Porto, leading to several claims of interest. 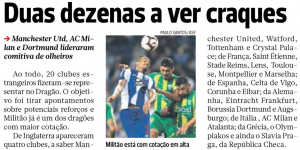 Depending on what happens with Danny Rose’s future, a move for Telles wouldn’t seem too outlandish a prospect in the future.

Tottenham were joined by clubs including Manchester United, who scout nearly every top Portuguese match.