Tottenham Hotspur fans probably don’t even like reminding of the club’s failed attempt to sign Bruno Fernandes from Sporting this summer.

But it turns out the bid from the London side has become an important topic this week. Firstly, because the Lions’ president Frederico Varandas confirmed the offer, and revealed the reason why it couldn’t be accepted.

“The only serious proposal, which was still only verbal, was a €45m bid from Tottenham for Bruno Fernandes, plus €20m in goals,” Frederico Varandas told Sporting TV.

Now Sporting are trying to give Fernandes a new contract, and the offer from Spurs has been having a direct impact on this.

When Bruno Fernandes signed a new contract with Sporting last year, they included a clause saying that if the club rejected a bid of over €35m, they would have to pay the player and his agents €5m.

In that interview this week, Varandas confirmed Tottenham’s bid, but when talking about a new deal, he said they wouldn’t pay the fine.

Now newspaper Record says agent Miguel Pinho doesn’t agree with that. They say Spurs made two offers, one of €45m + €20m and another of €60m + €10m, and the representative wants the money. 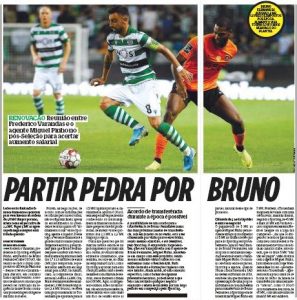 It’s said Sporting are willing to pay Bruno a salary of up to €1.8m net per season, while Tottenham’s offer would have meant €3.5m per year in London. So the player lost a lot of money when the offer was rejected.

O Jogo says there’s even a chance that Fernandes could leave in January or next summer, at least if Sporting drop their demands a little bit. Regarding possible destinations, the newspaper names Real Madrid, Paris Saint Germain and ‘English clubs’.