Barcelona B midfielder Riqui Puig impressed with his displays and played a key role in helping his side win the Uefa Youth League this season. The 18-year-old’s form in the competition saw him attract interest from Tottenham Hotspur.

Sport earlier reported the north London club are ‘close’ to signing the La Masia star. They even said Tottenham manager Mauricio Pochettino is “in love with Puig’s game”.

His contract with the La Liga winners runs out on June 30th. So far, the player has not signed a new deal and is aware of interest from Tottenham.

Today’s edition of Catalan newspaper Sport claims that Barcelona boss Ernesto Valverde has urged the club officials to block the central midfielder’s exit to Tottenham this summer. The former Athletic Bilbao manager considers Puig as a player with Barca DNA.

Barcelona have already offered Puig a new deal, but the player’s camp has so far not responded to the renewal offer. Valverde is keen on retaining the teenager and Sport claims the 54-year-old has given clear instructions to club officials to do “everything possible” to keep him at Camp Nou. 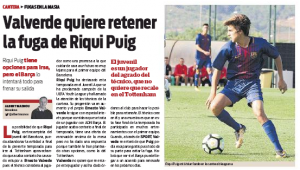 Valverde is an admirer of Puig and even included him in the first team training sessions at the end of the 2017/18 campaign. When the Barcelona manager learnt that he could leave as a free agent, he urged the club to put all their efforts in to blocking his exit.

Tottenham’s offer is on the table and is being considered as a serious option for Ruig.