On Friday, a source close to the potential transfer confirmed to Sport Witness that Spurs are in talks and that Miguel Pinho has asked Jorge Mendes to help get his client’s transfer sorted out.

The will is there, but not quite the money… yet.

Saturday’s edition of A Bola reports Tottenham have now made three offers. The latest saw them add €10m in bonuses to their previous €50m offer. That’s still not enough for Sporting who want to hit the €70m mark, almost as much as a matter of pride as finances.

A Bola say that during his meeting with Sporting on Friday, the midfielder reached a ‘gentleman’s agreement’ over a transfer. All parties have agreed that they’ll work in an amicable way and try to part on the best possible terms.

It’s further explained that Bruno and his agent encouraged Sporting to come down from their demands, using the player’s loyalty as the reason. 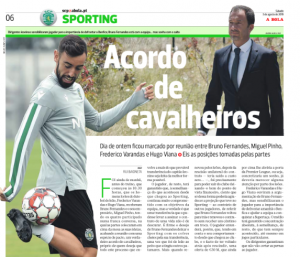 After the attack at the club’s training ground last season (when hooligans, allegedly encouraged by the club’s then president, physically assaulted players), the 24 year old was one of several to rescind his contract, however, he returned and signed a new one which didn’t have a pay-rise… A Bola say that wasn’t the case with others.

Right now, Sporting’s focus is on beating Benfica on Sunday in the Supertaca, and then there’ll have to see if there’s compromise to be reached on Bruno.

Manchester United’s interest is referenced again, although they haven’t made an official offer. Real Madrid interest is touched upon, although it’s not thought there’s much in it.