According to a claim in the Turkish media, Tottenham Hotspur have made a move for Fenerbahce playmaker Eljif Elmas.

The youngster has been linked with Spurs in recent months following claims in April the Premier League side were close to getting a deal done.

Fotomac have reported on what they say are the latest developments with regards to Elmas’ future, with a number of big clubs in Europe chasing the 19 year old midfielder, including Tottenham.

It’s claimed the North London club have offered Fenerbahce €19m plus Vincent Janssen, to try and reach agreement. Janssen has recently been linked with a return to the Super Lig after his loan spell with Fener during the 2017/18 season.

Tottenham should expect to face competition from Atletico Madrid and Sevilla for the Macedonian international. 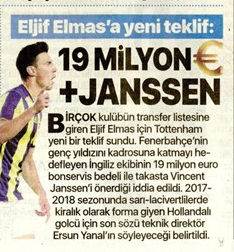 Fenerbahce signed Elmas from his boyhood club Rabotnicki in 2017 for €180K and subsequently the Super Lig are set to make a big profit on the player.

He is under contract at Ulker Stadium until June 2022.