Tottenham are ‘one of the favourites’ for Fiorentina striker Dusan Vlahovic and have already held talks with the Italian club in London about a move.

That’s according to Gazzetta dello Sport, who say that Spurs are ‘perhaps the favourite’ to secure the highly-rated striker’s signature, even after the big claims on Friday about Arsenal.

The newspaper explains that Tottenham are ‘not giving up’ in the race for Vlahovic, despite Juventus’ best efforts to beat the competition to him.

The Turin club are desperate to get the Serbian, who they, and their fans, believe could form a devastating partnership with Paulo Dybala in their side.

He’s ‘on their minds’, a fact that everyone has known for months but turning a dream into a reality is a ‘complex’ matter.

The biggest issue is the money involved, with Juventus not really having the financial leeway to fund a deal unless they can get several players off their books in January.

That opens the door for Tottenham, specifically Antonio Conte and Fabio Paratici, to make their move, and they are now ‘one of the favourites’ to win the race. 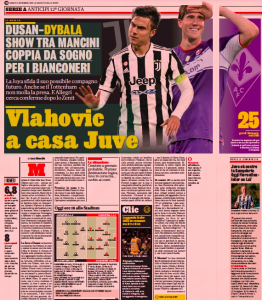 They’ve already met with Fiorentina chiefs in London to discuss a deal that would be worth €70m to the Italian club and see the player earn a salary not far from €6m a year.

Tottenham are seen as a ‘big threat’ to Juve’s chances of getting Vlahovic, although Harry Kane’s future will be ‘fundamental’ to the whole thing.

Ultimately it will be the player who decides his fate but the intent and effort is already there from Tottenham, who ‘do not let go’ in the transfer race.