Right after the news of Manchester City agreeing a fee for Kyle Walker came out, the Evening Standard reported that Tottenham Hotspur could replace the right-back by signing Ricardo Pereira from FC Porto.

The outlet claimed that Porto are confident Tottenham will pay the £22m demanded, as he was recommended by the club’s head scout Steve Hitchen.

Since Tottenham have already been linked to Pereira in the past few months, and his release clause seems pretty reasonable, it’s an obvious move to do once Walker’s departure is confirmed. But they better rush things. 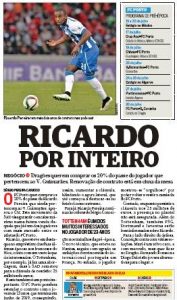 As reported by Correio da Manhã earlier this week, Porto are now looking to protect Ricardo Pereira with a better contract. The player has recently spent two seasons on loan at Nice, and now that he’s back and the Dragons count on him, it’s time to give the player a new status.

Their first action would be to buy the 20% share they don’t own, which belongs to his former club Vitória de Guimarães. That will obviously give Porto a bigger profit in case of a sale.

The second step is to give him a new contract, and obviously, make the release clause a lot higher. Porto are afraid he can be easily bought while this €25m release clause is active, and his place in the squad is not secure until they change it.

It’s claimed that besides Tottenham, PSG, Borussia Dortmund and Juventus are all aware of the player’s situation. So that’s more than one reason why it would be risky to move slowly.