Having been linked with Denzel Dumfries and Wilfried Singo, Tottenham are clearly looking for a new right wing-back.

Whether this is just to provide competition for Emerson Royal or replace him entirely isn’t clear, but with two different players in the same role being looked at, it’s seemingly an area Antonio Conte wants bolstered for Spurs.

That also depends on whether the Italian manager is still at Tottenham next season amid many rumours of him wanting the Paris Saint-Germain job, but should he stick around, then we can only assume Fabio Paratici will do his best to give him the players he wants.

Gazzetta dello Sport reckon Spurs are one of the interested parties in the Ivory Coast international, stating that many English clubs have sent ‘observers’ to watch the player, among which can be found the London side. 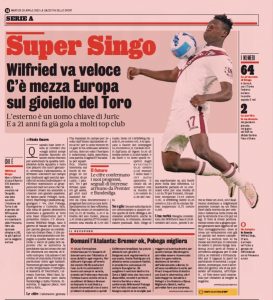 This comes after the likes of Tuttosport claimed Tottenham were strongly pushing for two Torino players in Gleison Bremer and Singo.

Gazzetta state that while the Serie A side aren’t exactly looking to sell their start right-back because his contract expires in 2024, should they be faced with an ‘adequate offer’ that is deemed ‘unmissable’ by the 21-year-old himself, then ‘the parties will talk about it in peace’.

What would that entail? ‘About €30m’ is what the newspaper suggests.

The ball is now in your court, Tottenham.