Tottenham manager José Mourinho have convinced PSG full-back Thomas Meunier to join the club this summer, but Daniel Levy is yet to sanction the deal.

Belgium international Meunier is out of contract at the French champions this summer and is yet to sign a new deal or be offered one by them.

As a result, he has many suitors around Europe, who see him as something of a steal in the current market.

Tottenham are one of them, according to L’Equipe, who say Meunier has already held talks with Mourinho over the phone about a move to London.

They report that the Portuguese boss told Meunier of his ‘desire’ to see him at Tottenham next season and this ‘clearly won over’ the defender.

While he is still hoping that PSG will offer him the chance to extend his stay, Mourinho’s efforts have put Spurs at the front of the queue for his signature. 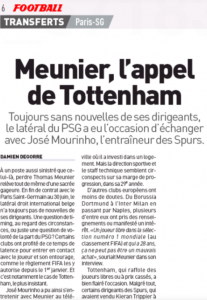 However, while he is keen to get a deal completed, his chairman Daniel Levy is ‘keeping a tight reign on him’ and so far refusing to sanction the deal.

He, and some of Tottenham’s other ‘managers’ are doubtful whether it would be smart to sign Meunier.

Why that is the case isn’t mentioned and seems a little strange given Meunier is available on a free and would solve a problem area for the club.