Inter Milan’s talks with Tottenham over defender Milan Škriniar have ‘intensified’ in the last few weeks, but a deal is not considered close.

That’s according to Tuttosport, who say that Škriniar ‘could be sacrificed’ by Inter this summer if they can get someone else in exchange.

The newspaper explains that the defender’s future at the club is ‘a story yet to be written’ as he’s found himself out of favour under Antoni Conte.

Unlike last year when he was considered ‘untouchable’ by the club, he has now fallen down the pecking order, managing just one start in their last five games.

Conte is not as big a fan as he once was, believing there are gaps in the player’s defensive ability and ‘limits’ to his ability to play out from the back.

Thus they are willing to let him go, particularly if they could get ‘another goal’ as part of the bargain. That is where Tottenham come into it.

Talks with them have ‘intensified’ in the last few weeks over a possible exchange with Tanguy Ndombele, who himself is out of favour under José Mourinho. 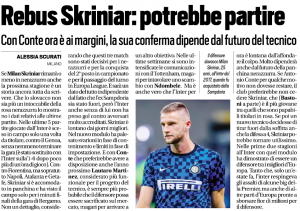 However, while that may be the case, Tuttosport make clear that Inter are ‘far from sinking’ for now. In other words, any deal is far from completion.

Much will also depend on Conte’s future. Should he leave then Inter would prefer not to lose Škriniar as he’s a player that could become ‘very useful’ under a new coach.

Tottenham, then, may have to wait to see if the move is on, with Conte’s future very much a key component in what would be a significant swap deal between both clubs.