With the international break upon us, now is the perfect time for the European media to analyse the start of the season of some of their national team’s players.

For France, the worry is at the back for L’Equipe, as Benjamin Mendy’s injury has weakened an already problematic position, with neither Layvin Kurzawa nor Lucas Digne exactly shining in their respective clubs.

However, if there’s one club where all is going well for France, it’s at Tottenham with both Moussa Sissoko and Hugo Lloris the shining lights from the Premier League ahead of the next couple of France games.

The Spurs midfielder, seen as one of the bigger flops of last season after his £30m move from Newcastle, appears to have found a spot in Mauricio Pochettino’s squad over the past few weeks and, after missing out on Didier Deschamps’ last squad, has earned himself a new call-up. 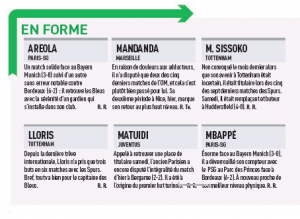 Scoring after coming off the bench against Huddersfield, Sissoko has started five of the last seven games, which is one of his best runs in a Spurs shirt.

As for Hugo Lloris, the three goals conceded in the past six games show the goalkeeper is back to his best after a slightly wobbly start to the campaign.

If things continue this way, especially for Moussa Sissoko, already seen as one of Didier Deschamps’ favourites, they could be two of the first names on his shortlist for the 2018 World Cup in Russia, unlike Olivier Giroud’s, whose constant spot on the bench at Arsenal is becoming a bit of a worry.