With Benfica being a club who have several loanees abroad, Portuguese newspaper A Bola today has a story about how these players have been dealing with Coronavirus at their clubs.

The one who gets the spotlight is Gedson Fernandes, who left the Eagles for Tottenham Hotspur on a six-month loan deal back in January.

Despite the Premier League’s decision to postpone all fixtures for now, the midfielder claims it’s all ‘normal’ at Spurs, since José Mourinho’s squad hasn’t stopped training so far, or at least at the time he spoke to A Bola. 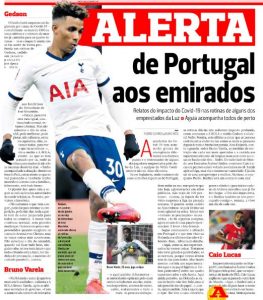 Back in January, it was claimed that an advantage for English clubs to sign Gedson was that his parents live in London. However, the midfielder still has part of his family in Portugal, and claims he’s been in touch with all of them.

“I have followed the situation, inside or outside the country, I am attentive to what is going on and I have also kept in touch with the family and, fortunately, everything is fine.”

Talking about how has been the life at the club, Gedson makes it clear they want to be prepared for the time when the league resumes.

“We don’t know what comes next, it may be possible to resume the competition, it may not be possible, everyone has to be prepared for all scenarios. Our life remains normal, without major changes. We were a little surprised when the cases at Arsenal and Chelsea came up, but sometimes bad things happen. We don’t know tomorrow, when everything will be fine, nobody knows, we can only do what the whole world is doing, take precautionary measures, as much care as possible.”