Another day, another Mousa Dembélé update from the Italian media.

This time, it’s Gazzetta dello Sport who provide it, explaining the Tottenham star’s ‘desire to go to China is gradually passing’, and it could be because there’s a good chance he’ll be able to team up at Inter with one of his friends: Radja Nainggolan.

The AS Roma midfielder isn’t with his national team in Russia, having been left out by Roberto Martinez, and is expected to team up with Luciano Spalletti once again, this time at San Siro.

Acting as the ‘sponsor’ while the manager ‘directs’ the operation, Gazzetta describe Dembélé as ‘fast approaching’, especially after it only took ‘a couple of encounters’ between Spurs and the Serie A side to ‘fix the stakes of the operation’. 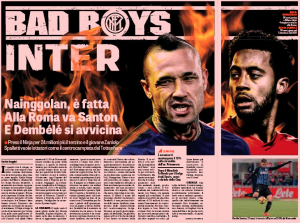 However, we’re also handed the standard warning that nothing will happen for the time being, because the Tottenham man is at the World Cup, and he’s made it clear he won’t be making an official decision on his future until July.