Tottenham Hotspur are keen on a move for RB Leipzig forward Marcel Sabitzer, who is likely to leave the German club in the near future.

That’s according to SportBILD, who say that the 26-year-old is a ‘hot candidate’ for a transfer with his contract set to expire in 2022.

Extending that deal is likely to be ‘too expensive’ for RB Leipzig to manage and so a transfer away is looking likely next summer.

The Austrian would like a move to the Premier League, a division which he finds ‘exciting’ and fortunately for him; there is interest.

That comes from Tottenham, who SportBILD say are at the front of the queue for his signature and ‘want’ him ‘above everyone’.

It’s not the first time they’ve been linked either, with the player openly flirting about a move earlier this year following a conversation with Jose Mourinho.

Either way, SportBILD also report that Sabitzer ‘should cost around €30m’, which would represent a massive profit in the €1.8m they paid to sign him from Rapid Vienna in 2014. 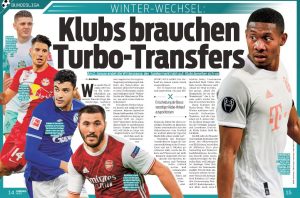 Whether Tottenham would be willing to pay such a price isn’t mentioned but given Daniel Levy’s preference to push as hard a bargain as he can, it’s easy to assume they would look to bring that asking price down.

Presumably, though, any deal would be heavily dependant on Spurs moving players on first. They already have four right-wingers in their squad as it is so it seems unlikely they’d want to add another.

Of course one of those is Gareth Bale, who would presumably be at the top of their wish list should he impress this season and the finances be right for the club.

That remains to be seen, and so it’s probably worth putting this rumour into the one to keep an eye on pile for the meantime.