Home Europe Tottenham and Man City ‘look at each other with scorn’ as race...
SHARE

Not a day goes by without the Italian media, somewhere, writing an article about the future of Dusan Vlahovic.

After all, the Serbian is seen as one of the most promising players in his position behind Erling Haaland, and so when Tottenham and Manchester City snooped around in the summer, there was some excitement.

Bids were reportedly made, but none were accepted, as Fiorentina weren’t interested in selling back then, but a lot has changed since.

The player has rejected an offer from the Italian club to renew his contract beyond the 2023 mark, when his current deal ends, and there is a belief that he will be sold in January if the right offer comes along.

Juventus remain the main interested party in Italy, but they are wary of the threat posed by both Tottenham and Manchester City, who ‘look at each other with scorn’, according to Gazzetta dello Sport. 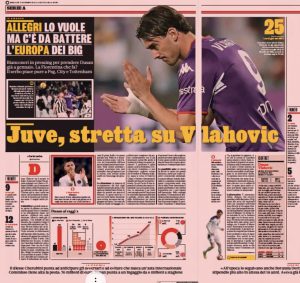 That will stem from both their interest in Vlahovic and the whole Harry Kane ordeal that took place in the summer, when the Spurs star made it clear he wanted to leave, preferably to team up with Pep Guardiola at the Etihad.

The move never happened, and Antonio Conte has arrived in London since, where there is now hope that the England international will feel his club’s ambitions now match his, bringing in a serial winner to lead them out of the rut created by Nuno Espírito Santo.

Manchester City, per Gazzetta, still have ‘Harry Kane as a primary objective’, with the Fiorentina striker right behind him.

The Italians, aware of the potential bidding war that could take place, ‘hope to take advantage of it and keep the price high: that is, between €60-70m’.