It appears that Tottenham Hotspur are trying to be very sneaky and haven’t given up on Victor Osimhen just yet.

Reports from France and Italy over the past few days have suggested the player was close to signing for Napoli, and a deal was getting very close to being completed.

However, while it’s now being reported that while Osimhen has his mind set on the Italian club, a few complications have arisen.

As reported by RMC Sport journalist Mohamed Bouhafsi, they stem from the fact the Nigeria international changed agents ‘a few weeks ago’, which has caused some ‘differences’.

Napoli, down their end, ‘are trying to close the deal within the next 24-48 hours max’, with a meeting taking place on Tuesday afternoon to sort that out.

But, and it’s a big one, the delay on the transfer means ‘two English clubs, including Tottenham’ are ‘trying to slide into the uncertainty’, with the name of the second team yet to be revealed.

Despite this move from José Mourinho’s side, Bouhafsi does make it clear on the website Napoli have ‘a big lead’ on the competition, and ‘only a last minute financial disagreement’ would stop Osimhen from moving to the south of Italy. 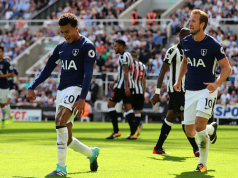