Today’s edition of AS claims Tottenham Hotspur are the latest club looking at the option of landing the former Valencia star. He is currently with the Spain national team at the 2018 World Cup in Russia.

Alba’s current deal at the Camp Nou runs down in 2020 and he has €60m release clause in his contract.

Raul Sanllehi left his position as director of football at Barcelona and moved to Arsenal as their head of football earlier this year, abd Alba’s agent Vicente Fores revealed when Sanllehi was in charge at the Spanish club, he promised his client would be given a new contract.

That was 18 months ago, and so far, no deal has been offered and the 29-year-old is attracting interest from the Premier League. 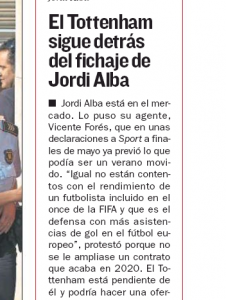 The report from AS claims Mauricio Pochettino’s side are aware of the situation and Tottenham “could make an offer” for Alba after the World Cup.

Spurs may be being pulled into this situation to add another interested club.

Alba is 29 years of age, with a contract running until June 2020, and he doesn’t seem like a typical Tottenham signing.