Amid Real Madrid’s lavish spending this summer, there’s also a desire to move people on from the squad.

Zinedine Zidane is completely overhauling the club, and that means more than one player finds himself on the chopping block.

As well as the obvious candidates like Gareth Bale and Isco, the likes of Dani Ceballos find themselves on the hunt for a new club.

AS have covered the potential departures from the Bernabeu today and are particularly interested in Ceballos’ future, which could be at Tottenham.

They say that, unlike some, the midfielder is one Madrid want to keep for the future, but Zidane has no place for him in his team this year.

That has led Ceballos to look at one-year loan deals, with both him and the club only interested in entertaining that kind of offer. That’s where Tottenham come in.

AS report that Ceballos has no shortage of suitors, with England the ‘most likely destination’. Spurs are the ‘main candidate’ at this point in time.

Mauricio Pochettino is keen on adding to his midfield this summer as part of his overhaul of the squad while Ceballos sees Tottenham as an ideal location to help him ‘return to prominence’. 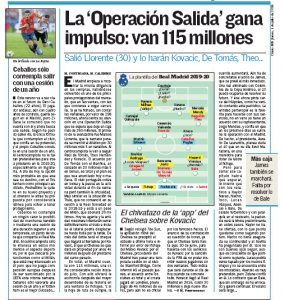 AC Milan are another suitor, but their recent removal from the Europa League devalues them as a potential location.

Given the good working relationship between Madrid and Tottenham, the fact that Ceballos likes the idea of the move and Pochettino is keen too, this seems like a deal that is there to be completed.