Takehiro Tomiyasu is edging ever closer to Tottenham, if the latest report from Italy is to be believed.

It comes from Corriere di Bologna, who have a lengthy article on the matter on Friday, claiming the negotiation between Bologna and Spurs ‘is coming to a close’.

As expected, Tottenham made a ‘second bid’ for the Japanese defender, which has arrived on the desk of the Serie A club, and is ‘close to the requests’, estimated at €19m + bonuses that would bring the total to €22-23m.

It’s made clear that ‘we are not there yet’, since Bologna want €25m, or at least €20m fixed to start with so they can make signings of their own.

However, ‘the parties have become significantly closer’ and there is ‘great optimism’ at Tottenham, especially since Fabio Paratici has reached an agreement with the player regarding the wages and duration of the contract. 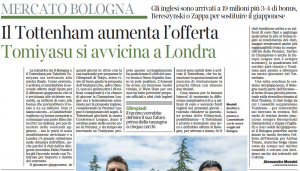 Tomiyasu, while he wouldn’t have minded going to Atalanta, who seem to have since pulled out, is ‘literally enthusiastic about the English proposal, considering the Premier League is the championship of his dreams’.

Currently, there is just €2-3m missing to get the deal over the lines, which shouldn’t take long to arrive, since they ‘want to close the matter before the Olympics’, where the player will represent his country.

Tottenham, down their end, are ‘ready to formulate a third and definitive offer to Bologna’.