Mauricio Pochettino is negotiating with Tottenham Hotspur to return to the north London club, but Real Madrid’s interest could ‘alter his plans’, according to AS.

Both Spurs and Los Blancos are looking to appoint a new manager for next season, following the exits of José Mourinho and Zinedine Zidane.

The former Southampton boss joined Paris Saint-Germain at the start of this year, but after ‘going through a bad situation’ in Paris, he’s looking for a way out. The 49-year-old is aware of the La Liga side’s interest in him.

It’s claimed the Argentine’s relationship with PSG sporting director Leonardo is ‘more than weakened’ and he’s ‘angry’ at not having ‘greater power’ when it comes to making sporting decisions.

The Premier League side want to bring Pochettino back to English capital, despite sacking him in November 2019.

According to the claims, Spurs have ‘already made a move’ after Daniel Levy personally called Pochettino on several occasions to ‘convince’ him to return to the club.

The PSG manager, who still has a house in London, is willing to return to Tottenham if two of his requirements are met.

The first one is he needs a contract for at least four years. AS state: ‘He does not forget that last time he was kicked out mid-season and now he wants an armoured bond in this regard’.

The second request he wants is to ‘enjoy full powers’ when it comes to taking sporting decisions. 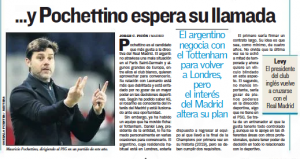 Even though there will be people around him, he wants to have ‘decision-making power’ when it comes to ‘everything related to sports’.