The race for Arkadiusz Milik continues to be one of the hottest topics in the Italian sport press, as the striker is expected to leave Napoli this summer.

Newspaper Tuttosport today has a story focused on his wish to sign for Juventus, as he wants to join the likes of Cristiano Ronaldo and Paulo Dybala at the Old Lady.

And even though other clubs such as Tottenham Hotspur continue to follow him, it’s been a tough mission to change his mind about that.

Tuttosport claims that Atletico Madrid and Spurs have both made contact for his signing in the past few days, but haven’t found a very good response. 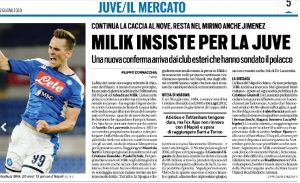 Milik is said to be very focused on joining the Turin side, and in case the club really go for him, Tuttosport says it would be a tough mission to destroy this plan.

The striker has 13 goals in Serie A this season, and since his contract with Napoli expires next year, the club can’t demand a lot for his sale.