Home Premier League Tottenham said to have made bid for summer target, lower than initial...
SHARE

According to Turkish newspaper Star, Tottenham Hotspur have made a €15m bid to sign Fenerbahce youngster Eljif Elmas.

It’s claimed the Premier League side also offered a ‘certain percentage’ of Elmas’ next sale and the final decision will be made by Fenerbahce president Ali Koc.

Inter Milan, Atletico Madrid, Napoli and Fiorentina are all said to be interested in signing the Macedonian midfielder, with Tottenham firmly in the picture.

Previous reports from Turkey suggested Spurs were close to signing Elmas and more recently it was claimed they’d offered €19m plus Vincent Janssen to land the youngster.

That sounded generous, this latest claim sounds more like Spurs.

Fenerbahce need to sell Elmas to rebuild their squad this summer and Star believe the Premier League club can provide the funds. 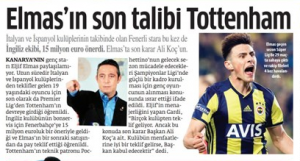 Pochettino will be looking to add to his squad in this transfer window, and 19 year old Elmas is one for now and the future.

He’s under contract with Fenerbahce until June 2022.